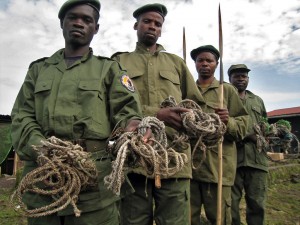 The success that anti-snaring teams have is a demonstration of one of the key ideas behind TrailGuard. Namely, that the trails used by poachers are well-known. All the snares pictured above were picked put by rangers who walked along the exact same trails as did the poachers who placed the snares.  Only the rangers walked the trails long after the poachers. And long enough after that in many cases and animal could already have been snared.

If  instead TrailGuards had been set out beforehand – as traps for poachers – every poacher who set those snares on those  trails would himself have been “snared” by a TrailGuard and a alarm sent immediately to rangers to close their trap on the poacher.

Wait, I cannot fathom it being so straightofrwrad.